What Is A Hamsa?

origin of the name 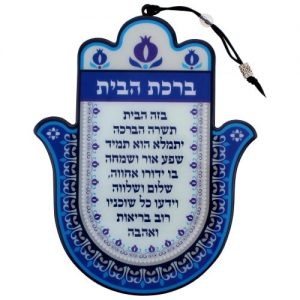 The Hand of Miriam the Prophet

Imitation in Islam of the Hand

The source of the Hamsa from the Jewish Kabbalah

For those interested in numerology, the word “Hamsa” means five, which is a prime number. The number five is a powerful number symbolizing protection, power and good fortune. The fifth letter of the Hebrew alphabet is “hey,” which means “Ado-nai” (God). The word “yad” (Hebrew for “hand,” the shape of the Hamsa) has the number 14. If you take the number 14 and view it as 1 plus 4, it equals 5, the number for Ado-nai.

The Hamsa Shape – a five-fingered palm, an oriental ornament derived from Kabbalistic manuscripts, and widely accepted as a product to evade the evil eye from home, embodying love and blessing and success. On this page you will find ‘hamsas’ of various sizes, beautifully crafted metal in color tones, with special forms of Jewish motifs, pomegranates and grapes, built Jerusalem and the tree of life. You can hang the hamsa on the wall or as a desk stand and enjoy a special artistic decoration for the home, which will add a lot to the look and feel of your family