The History of Mezuzah Scrolls

The Story of Ruth

Much of the Mezuzah’s importance is revealed in the story of Ruth. She was King David’s grandmother and converted to Judaism. Her mother-in-law told her that daughters of Israel should not dwell in a house without a mezuzah. When Ruth accepted this law, she embraced Judaism and Israel. Thus, the importance of the mezuzah in modern Judaism has descended from this vital story.

One of the most important commandments of the Torah is found in the testimonies category of Edith. This is where the Torah commands the mitzvah of Mezuzah. It is one of the only mitzvahs that applies to every person, regardless of age or gender. It is also said to follow people even after death or the end of bodily existence. The Mezuzah protects the Jewish home and sets it apart from the outside world, marking it as a holy place.

Meaning of the Word

The word Mezuzah can actually be translated to simply mean “doorpost.” However, it has taken on a far more significant meaning. Although based on Akkadian language and the word “mezuzoth”, the colloquial meaning now applies to the scrolls themselves. The word has become so important to Judaism that it is sometimes used as a girls’ name.

The tradition of using Mezuzah scrolls inside Jewish homes and businesses has been around for quite some time. In fact, it is believed that it began all the way back in the Jewish year of 2448. At this time, the commandment wad first given at Sinai. Historians believe that the forty-year trip through the desert was likely exempt from the commandment. However, Mezuzah usage likely became more permanent upon settlement in Canaan. This was around the Jewish year 2488.

Ancient scrolls and Mezuzah cases have even been found in areas of the Dead Sea. Some of these Mezuzahs even date back to the era of the Second Temple. This era was from 516 BCE to 70 CE. The name refers to the Second Temple of Jerusalem, which only existed during this time. Ancient Mezuzahs are important antiquities, reminders of the long history of the Mezuzah scroll.

Just like most historical practices and ancient traditions, the Mezuzah scroll has changed over time. There have been some lapses in usage, and some groups of people used the Mezuzah scrolls differently than others. During some moments in history, the usage of Mezuzah scrolls and other sacred practices of Judaism was even prohibited by law. For example, this was the case when Judea was occupied by the Roman Empire. Historians also note many lapses of Mezuzah usage in Spain, mostly up until the year 1235.

The Jewish community in Spain usually places their Mezuzah scrolls vertically or with a slight inward tilt. There are many other differences and varieties among countries and communities. Spanish and Portuguese Jewish communities recite a unique blessing, different than most other Jewish communities. The Samaritan Jewish do not require Mezuzah at all. However, they often affix the Ten Commandments in doorways or at main entrances instead. This is similar to the Karaite Jewish, who use blank plates instead, symbolizing the Torah Tablets.

One of the most important things about the Mezuzah is its beauty and symbolism. The Mezuzah has become one of the most recognizable symbols of Judaism, a powerful reminder of commitment. They are also a great reminder of all the basic beliefs behind the Jewish faith. They are placed in the doorways of homes and businesses in order to provide a reminder upon both leaving and entering a place. The scrolls and their cases are also a sign of love and commitment. 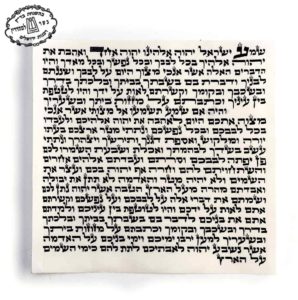 Chazal teaches that a mezuzah has the unique characteristic of protecting the residents of the house on which it is dependent – whether the residents are inside or outside the home. The mezuzah can be compared to a Shield that protects us from the dangers that surround us in our lives.

When passing through a door in which a mezuzah affixed, we peek at it and touch it. Some people and their palms kiss. This serves as a reminder during the day that G‑d is always with us, inside or outside our houses.

God assures that anyone who strictly observes the mezuzah will lead to a more productive life, like their offspring, as the Deuteronomy says, “Then you shall date your days and the days of your children.” It would be best if you hung a mezuzah on pretty much every door that belongs to you.

Exceptions are doors leading to baths and closets that are smaller. These words are handwritten by a professional scribe who’s trained in the various laws involved with composing a mezuzah, including the requirement that it produced with specific intention and that the words be written in order.

The case Contains the mezuzah klaf. What is significant is the scroll, upon the first two segments of the Shema Israel, are handwritten, Starting with the immortal words “Hear o Israel, the Lord is our God, the Lord is One.” These choices both comprise God’s teaching to attach the mezuzah: “You shall write them on the doorposts of your house and your gates.”

On the other side of the scroll, the author writes between the titles of God: “Shaddai.” The three letters of the name make initials of the Hebrew words meaning “keeper of the doors of Israel.” As a result of the fact that the name “Shaddai” begins with the letter “shin” – therefore the mezuzah cases are usually adorned with the letter “shin”

It is customary to check the mezuzahs every year

It is customary to check the mezuzahs every year, before the holidays. Also If the mezuzah was purchased in a shop of God-fearing people and previously detected to be entirely kosher, New problems can always arise And there may have been a mistake in proofreading – human mistake, and new holes and other problems can develop with age.

The mezuzah must be checked once a year

The Lubavitcher Rebbe would often beg people who faced health difficulties or other matters to receive their mezuzahs, to ensure that each scroll was in good condition and correctly located on each doorpost.

The Talmud teaches that while most of the kings sit on their faces while their watchmen protect them from the Almighty, His protection stations (as expressed in the mezuzah) outside, protect His loved ones. If you need assistance obtaining a new mezuzah or with your present ones assessed, the last Lubavitcher rabbi will be delighted to help you.

Every letter in the mezuzah must correctly be formed.

Every letter in the mezuzah must correctly be formed. A crack at any omission or the parchment can invalidate the scroll. It is essential that it bought from a retailer or a scribe. Mezuzah scrolls are wrapped up and affixed to the Home doorways of Jewish people So that one can distinguish between a house in which Jews live and a house where gentiles live.

Judaism is much more than prayers in the synagogue. We work hard inside familiarity and the comfort of our own houses for spirituality. The mezuzot in the doorways remind people who walk through them; that G‑dly life and the Torah accompany them wherever they go.